第2位
都柏林機場皇冠假日 - 都柏林
8.9
極好 8.9
根據1,314則評價
詳情
評論
NT$ 4,922
查看優惠
都柏林機場克萊頓酒店 - 都柏林
查看詳細資料
清潔度
9.1
舒適
9.0
地點
8.8
服務
8.7
工作人員
8.7
整體 8.6 極好
根據8,294則評價
所有評價
清潔度
9.1
舒適
9.0
地點
8.8
服務
8.7
工作人員
8.7
極好 9.1
優點： The courtesy of staff The promptness of my getting my room The efficiency of the shuttle bus service and the willingness of the drivers to help load/unload luggage The cleanliness and comfort of the room
缺點： The one thing I intensely disliked was the €7.50 tray charge for room service, I thought it was excessive and money-grabbing. I realise there is a cost involved in providing room service, but would have thought this was probably absorbed in the room charge.
一般 3.7
優點： The bed was comfortable and the shower was good.
缺點： We stayed here for one night on Thursday 2 November 2017. The shuttle bus stance 16 is one of the furthest from the terminal building. It is approximately a 10 minute journey but can take longer depending on traffic and time of day. At check in the receptionist was efficient but her appearance was poor giving rise to concerns about standards in the hotel. We found the atmosphere in our room oppressive; despite the air conditioning there was no humidity at all. We tried opening the window but it was too noisy due to the hotel's engineering system. We were forced to try again later but then found that the locking mechanism on the window jammed and the night staff could not fix the issue at 3.30am so we had to put up with the noise for the rest of the night. As a result we got very little sleep. Despite the member of the night staff saying that he would report the issue, the receptionist had no record of it at check out but promised to investigate. Two days later I have heard nothing from the hotel and no offer of compensation against the prepaid charges. On the return to the airport the standing room only bus departure was delayed 15 minutes due to a driver change over with the bus engine left running. This is a very busy hotel 10 minutes from Dublin Aiport using the hotel's shuttle bus which theoretically runs every 20 minutes. The hotel is isolated at an island off the motorway so you have no alternative for food other than the hotel's own coffee shop, bar and restaurant; and prices! The bath towels were very thin. There was a hole in the bathroom sink which they had unsuccessfully attempted to cover with silicone. If I was overnighting at Dublin Airport again I would look for an alternative closer to the airport.
極好 9.7
優點： Staff are very friendly and helpful
缺點： It’s missing a few ash trays outside the front door of the hotel 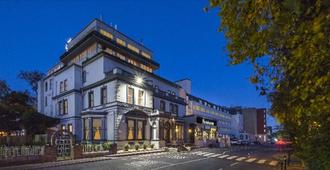 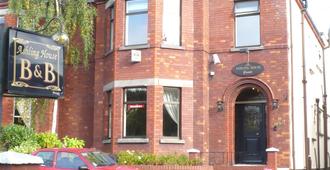 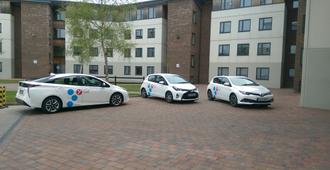