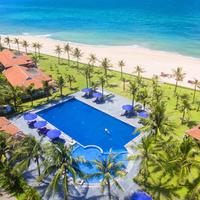 When you stay at Lapochine Beach Resort in Thuan An, you'll be by the sea and steps from Thuan An Beach. Featured amenities include complimentary wired Internet access, a 24-hour business center, and complimentary newspapers in the lobby. Planning an event in Thuan An? This resort has 3767 square feet (350 square meters) of space consisting of a conference center and a meeting room. A roundtrip airport shuttle and a train station pick-up service are provided for an additional charge.

「Beside the resort, there are some small restaurant with fresh food.」