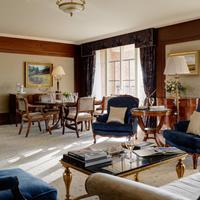 InterContinental® Dublin Hotel welcomes you to its elegant Urban Resort, nestled on two acres in the exclusive neighbourhood of Ballsbridge. The city centre is only a short stroll away. The 208 luxurious Rooms and Suites afford views of the city skyline, coast and mountains. Indulge in Irish cuisine, cocktails or take a tour of some of Ireland’s famous whiskeys with our expert sommelier. More relaxation awaits in The Spa, sauna and heated pool and in the genuine Irish hospitality of our staff.