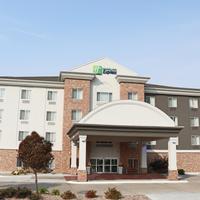 "Stay Smart" at our Holiday Inn Express Kearney, NE! Whether you are coming to Kearney for business or pleasure, you can find all the comforts of home at this Holiday Inn Express hotel. Besides top-notch services & amenities, we offer easy access to I-80 at one of the most convenient locations in the Midwest.If business is the reason for your trip to Kearney, lodging with us is the ideal choice. Our beautiful accommodations are near many area businesses, including Parker Hannifin, Eaton Corporation, Inter-Motion Manufacturing, West Pharmaceutical Services and Good Samaritan Hospital. We also offer convenient business amenities like Free high-speed Internet access, and a 24-hour business center. Leisure travelers appreciate the location of our Kearney, Nebraska hotel, as well. We are just a short drive from local attractions, such as the Great Platte River Road Archway Monument, the University of Nebraska at Kearney, Fort Kearney State Recreation Area and the Museum of Nebraska Art. Guests staying here enjoy a number of comfortable amenities, like a heated indoor pool and whirlpool, fitness center and a complimentary hot breakfast bar, featuring our signature cinnamon rolls! Free parking for all guests with plenty of space for cars, trucks and buses. Whatever the reason for your trip to Kearney, Nebraska, our hotel is sure to have exactly what you need for a carefree stay.