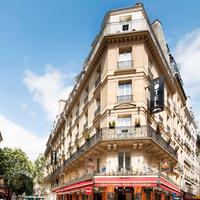 With a stay at Hotel Europe Saint Severin Paris, you'll be centrally located in Paris, steps from Ile de la Cite and 6 minutes by foot from Notre-Dame. Featured amenities include a computer station, express check-in, and express check-out.

「The position, the view from the room, the balcony, the bed and the bathroom.」