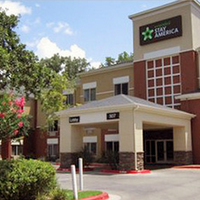 「Convenient」
「Very convenient location for walking downtown Austin.」
「I absolutely loved the location, $10 Uber ride to bars / clubs. Room was extremely spacious and had a full size refrigerator kitchenette. Perfect for those traveling for longer periods of time or with children. Hotel was clean, COVID-19 precautions were being followed, staff was friendly and most importantly for this area to find a hotel with parking for less than $40 is a steal! Only paid $5 and felt that my vehicle was safe.」
「Friendly staff and great location.」