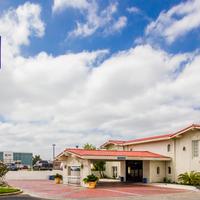 Motel 6 Austin Midtown is located off I-35 at St Johns Ave within 5 miles of U.T. Austin, LBJ Library, Texas state capitol and governor's mansion. 6th Street Entertainment is only 5.5 miles away. Free Wi-Fi available in all modern guest rooms.

「Nothing but the cheap price」
「There was no breakfast and the location is ok except for the druggies hanging out.」
「Staff is always polite and courteous.」