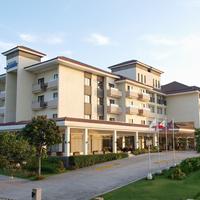 Located in Tagaytay, Hotel Kimberly Tagaytay is in a rural location, within a 10-minute drive of Sky Ranch and Pink Sisters. Featured amenities include a business center, complimentary newspapers in the lobby, and dry cleaning/laundry services. Planning an event in Tagaytay? This resort has 850 square feet (79 square meters) of space consisting of conference space and a meeting room. A roundtrip airport shuttle is provided for a surcharge (available 24 hours), and free valet parking is available onsite.

「The room was nice but the hotel breakfast buffet was not that great.」
「Room is clean and beautiful.」