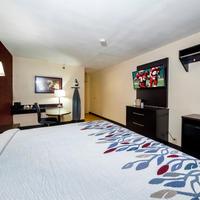 With a stay at Red Roof Inn Jacksonville - Cruise Port, you'll be centrally located in Jacksonville, within a 15-minute drive of Jacksonville Zoo and Gardens and Jacksonville Cruise Terminal. Free self parking is available onsite.

「Best heating and air condition」
「The front desk lady was friendly」
「"Great comfort, at a great price."」
「Loved how nice the staff was.」
「The beds were comfy.」