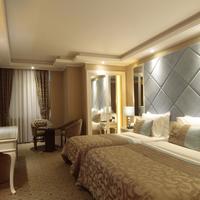 A stay at Black Bird Hotel places you in the heart of Istanbul, within a 15-minute walk of Grand Bazaar and Beyazit Square. Featured amenities include a 24-hour business center, express check-in, and express check-out. Planning an event in Istanbul? This hotel has 1829 square feet (170 square meters) of space consisting of a conference center and a meeting room. A shuttle from the airport to the hotel is provided for a surcharge (available 24 hours).

「The breakfast was good, and the hotel location is nice」