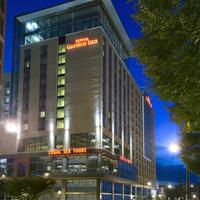 The Hilton Garden Inn Downtown Atlanta hotel is situated at the crossroads of the city's most preferred destination, Centennial Olympic Park District and Restaurant Row. You will find us immediately adjacent to The Georgia Aquarium and World of Coca-Cola Museum, and just a short walk from Mercedes-Benz Stadium - home of the Atlanta Falcons and Atlanta United; State Farm Arena - home of the Atlanta Hawks; CNN Center, and the Georgia World Congress Center. Also within easy walking distance of the Hilton Garden Inn Atlanta Downtown hotel you will find Imagine It!, the Children's Museum of Atlanta; the College Football Hall of Fame, the Center for Civil and Human Rights and much more. The Hilton Garden Inn Atlanta Downtown hotel is easily accessible to major highways I-85 and I-75; and is just three blocks from MARTA rapid transit, which allows you to explore all that Atlanta has to offer.

「Upon arriving I was trying enter the lobby door. Door was mess up didn’t not open please sh door open. Open the door too the room 820 , nasty tissue on the floor Call downstairs and told the concierge no one never came she stated that they will send housekeeping it never happened with me and my boyfriend was pulling the baby blood on the comforter horrible horrible horrible horrible」
「We were there for a wedding, that was actually at Ventanas so everything was walking distance! Convenient!」
「Close to downtown」
「The location couldn't have been any better」